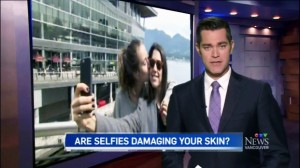 A British doctor says selfies cause wrinkles and premature aging, but a B.C. dermatologist says the sun is the real culprit.

CTV News consulted Dr. Jason Rivers about a recent report from the U.K., where dermatologist Dr. Simon Zohaie told London newspaper the Daily Telegraph that bloggers and Instagram addicts should put down their smartphones because according to him, the radiation from smartphones can speed up aging and cause wrinkles. “It’s a different wavelength of radiation so sunscreen will not block it”, he said. Another doctor commented that the effects are so obvious that he said he was able to tell whether his patients use their left or right hands when holding their phones. 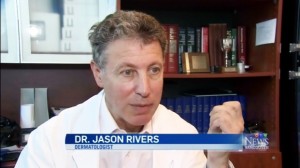 But Vancouver dermatologist Dr. Rivers told CTV News that the real culprit is the sun. “Wrinkles are caused mainly by ultraviolet radiation from the sun, and these devices don’t produce that type of radiation,” Dr. Jason Rivers said Monday.

But Rivers said there was a recent study that suggested that some of the sun’s UV light may be reflected onto a cellphone user’s face when they’re taking a selfie. In theory, this could increase the user’s exposure to wrinkle-causing UV rays, “but on a day-to-day basis it’s not going to cause wrinkles,” he said.

Rivers added that he has not seen any data proving the U.K. doctor’s theory. He said that what is more likely to cause skin problems is infrequent handwashing – “You can transfer bacteria from your hands to your cellphone to your face and potentially, theoretically at least, cause infections.” He said that cellphones also emit a low level of blue light, which can help to reduce acne at a high intensity.