Dr. Rivers in Global National News feature on how men are less concerned about skin cancer than women 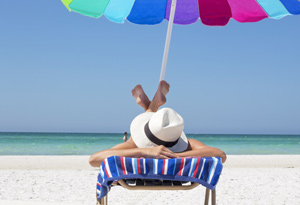 In the Canadian Dermatology Association’s annual survey on sun and skin cancer awareness, 55 per cent of men said that they were concerned about the risk of skin cancer as a result of sun exposure, compared to 67 per cent of women.

The problem is, more men than women die of melanoma. The CDA estimates that in 2017, 450 women died from melanoma, compared to 790 men. Men also account for a greater percentage of melanoma cases than women. Unfortunately, skin cancer is on the rise in Canada, due in part to UV ray exposure both from the sun and from other sources like tanning beds.

Most people are aware of the dangers of sun exposure, said Dr. Jason Rivers, clinical professor of dermatology at the University of British Columbia, but not enough people translate that awareness into action and protect themselves.

“Women are more health-aware and more likely to take actions in terms of health maintenance and prevention compared to guys,” he said. He thinks this is true across medicine, but also in dermatology.

Men are also more likely to put off getting a problem looked at, which might mean things are worse by the time they get medical attention, he said. “In a sense, it’s reflected in part in the fact that mortality rates are increasing faster in men than women with regards to skin cancers, specifically melanoma.”

In men, most melanoma cases appear on the back – likely because they have their shirts off more often during hot weather, he said. “This is an area that you can’t see, so that may be one area and one reason why people are less likely to detect this early.”

Dr. Rivers would like everyone – men and women – to take more precautions when they’re in the sun. Simple things like wearing more clothing, putting on a hat and sunglasses, and using sunscreen can help to reduce the risk of skin cancer.