Reader’s Digest Best Health featured an insightful look into the Obagi Nu-Derm system, which effectively reduces the appearance of sun damage in your skin. 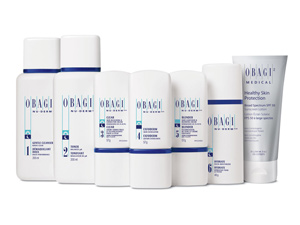 The Obagi Nu-Derm system is a dermatologist-recommended medical skin care line, and the article shows how it gave a woman the opportunity for her skin to start fresh after years of not using enough SPF. There is a week by week summary of her journey to better skin, with before and after photos.

“The key ingredient [in the Obagi NuDerm system] is hydroquinone, a lightening agent that targets the melanocyte, inhibiting an enzyme called tyrosinase.” This potent ingredient diminishes freckles, age spots, post-inflammatory hyperpigmentation and even melasma. Your dermatologist decides what amount of hydroquinone and tretinoin to prescribe based on skin type and amount of sensitivity.

During the day, the process involves a gentle cleanser, toner, a “Clear” treatment (the hydroquinone-containing product), as well as an exfoliator called Exoderm (contains lactic, phytic, and glycolic acids), a moisturizer, and a sunscreen (SPF 50).

At night the only difference in the steps involves a foaming cleanser, as well as the addition of a “Blender” product, which is where tretinoin is introduced.