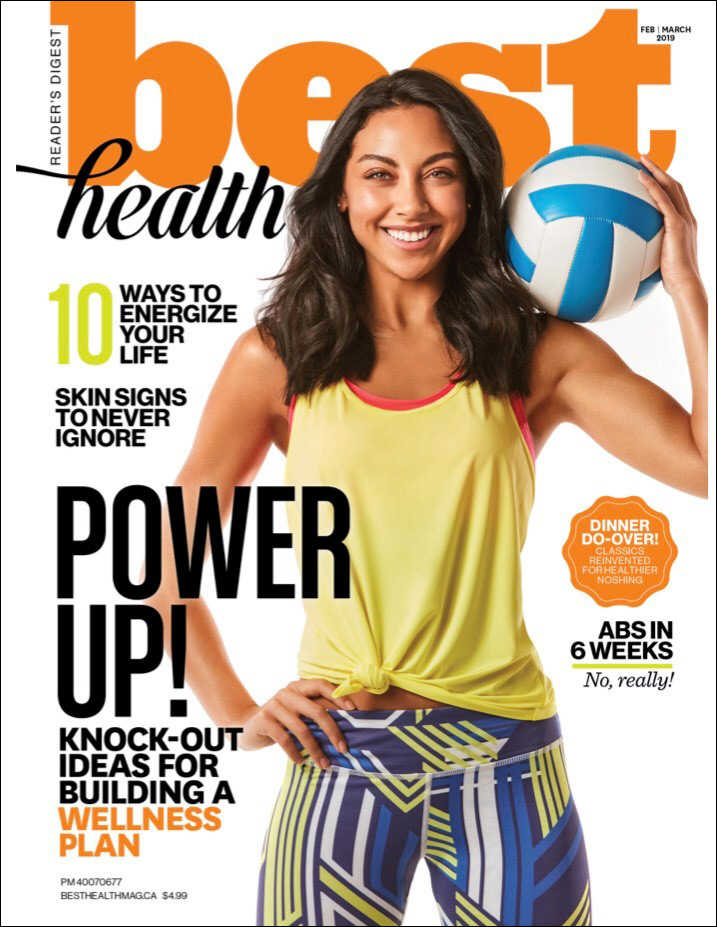 Dr. Marcie Ulmer: “One of the things I really love about my job is that a lot of it is detective work.” Dr. Marcie Ulmer lent her expert opinion to the editors of Best Health Magazine to weigh in on signs your skin may be giving you about your overall health.

The article spotlights 8 diseases, the symptoms of which may be revealed in changes to your skin: lupus, psoriatic arthritis, internal cancer, addison’s disease, diabetes, thyroid disease, celiac disease, and hepatitis. Warning signs of each are discussed along with expert points of view from Dr. Ulmer and other specialists. It concludes with four common skin signs associated with aging that are harmless and easily removed, if you’re so inclined. “A Sign of Things to Come” by Lisa Kadane is a 5-page spread in the February/March edition of Best Health Magazine. Read the full article below and get your copy of Best Health today! 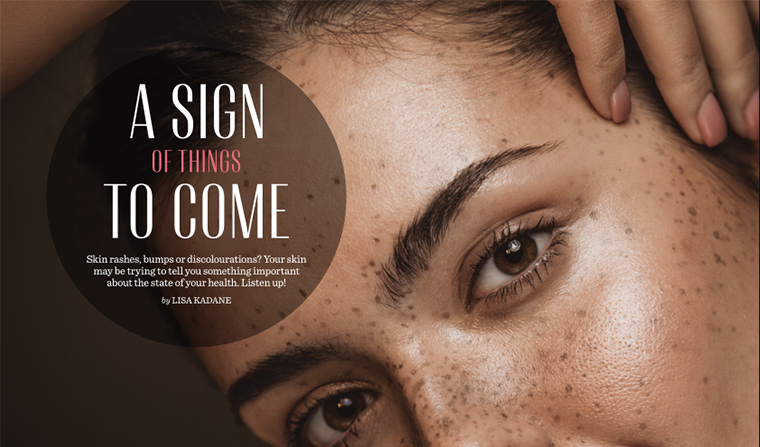 Skin rashes, bumps or discolourations? Your skin may be trying to tell you something important about the state of your health. Listen up!

Leslie Doane was travelling in Guatemala when she noticed her skin and eyes taking on a yellowish tinge.

“I remember looking in a mirror at the whites of my eyes and I thought, ‘That’s not right, that’s not normal. They look really yellow. Am I sick?’” recalls Doane. “I knew that was a sign of hepatitis, but I’d had the Havrix vaccine for Hep A.”

She visited a clinic and a blood test confirmed she’d contracted Hepatitis A, a highly contagious viral liver disease transmitted through ingestion of contaminated food or water, or exposure to people with the illness through close personal contact, such as caring for an infected friend. After a couple months of extreme fatigue and lots of rest, Doane’s energy levels rebounded, and her jaundice (the yellowing of skin and eyes) receded.

Jaundice is a common symptom of liver disease, but it’s not the only surface change that signals an internal health problem.

Our skin is more than just our covering. It is the body’s largest organ, and as such, is synergistically connected to other organs through our lymphatic, nervous and circulatory systems. Its size, visibility and accessibility often make it the first place that symptoms of internal disease show up

“There are so many skin manifestations of disease, whether you’re talking about liver disease, kidney disease, autoimmune disorders, endocrine disorders, malignancy. Almost every disease of organs has a skin symptom,” says Dr. Lynne Robertson, a dermatologist and clinical associate professor in the Department of Medicine, Division of Dermatology, at the University of Calgary.

We’ve been taught for years to monitor our skin and look for differences in moles that could indicate skin cancer. Not to add to your daily postshower regimen, ladies, but changes in colour, texture or feeling on the skin’s surface – in the form of rashes, growths or sensations such as itching – should also be checked out. And it doesn’t stop with just the skin– alterations in the nails or with hair growth (or loss) can also be a tip-off that something’s not right internally.

“One of the things I really love about my job is that a lot of it is detective work,” says Dr. Marcie Ulmer, a cosmetic and medical dermatologist with Pacific Derm in Vancouver. “It’s like a window into one’s health – the skin, the hair and even the nails can provide clues to what’s going on inside.”

Here are eight diseases that may first reveal themselves through skin analysis.

This autoimmune disease affects one in 1,000 people, more commonly women. It causes inflammation in tissues or organs such as the skin, muscles, joints, kidneys, lungs and heart. Its nickname is “the disease with 1,000 faces” because it presents differently in each case, making it difficult to diagnose.

WARNING SIGNS The classic skin symptom is a butterfly rash on the cheeks and bridge of the nose. There might also be a history of sun sensitivity, mouth ulcers or other skin rashes.

PRO P.O.V. “A facial rash is usually not lupus, but if the rash is purple and near the hairline, and you’ve got little patches of hair loss that your hair-dresser notices, and if your fingers are changing colour in the cold, and the small joints of your hands and feet are getting painful, then probably you should talk to your family doctor about doing a blood test for lupus,” says Dr. Kam Shojania, clinical professor and head of the Division of Rheumatology at the University of British Columbia. 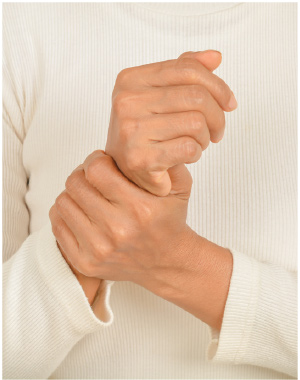 An inflammatory arthritis that affects 10 to 20 percent of people, psoriatic arthritis usually presents in people who already have psoriasis, a skin condition marked by raised, scaly red rashes with silvery scales.

WARNING SIGNS People who develop psoriatic arthritis usually present with psoriasis first, but it can appear in funny places, such as on the scalp, around the belly button or in the crack of the butt. They might also have nails pitted with what look like tiny pinholes.

PRO P.O.V. “Everyone is worried about lupus, but psoriatic arthritis is more common and under-diagnosed,” says Dr. Shojania. There are five types and the most common is symmetric psoriatic arthritis, which affects one or two joints, a finger or toe, on both sides of the body at the same time. The most debilitating (and least common) is psoriasis mutilans, which can completely disfigure the small joints of the fingers and toes. If you have psoriasis and develop symptoms of arthritis, tell your family doctor – it needs to be evaluated and treated.

Everyone knows skin cancer shows up on the epidermis. But sometimes internal cancers such as gastrointestinal (GI), lung or ovarian, can have skin symptoms, too, thought to be a response to hormones or substances released by the tumour.

WARNING SIGNS A condition called acquired hypertrichosis lanuginosa is when people develop excess fine white hairs, usually on their face, that’s known as a ‘malignant down’ and is an ominous sign of internal malignancy most commonly associated with lung and colon cancers. Thickened velvety plaques on the palms, called tripe palm, is a significant marker for stomach cancer, and similar velvety plaques on other parts of the body—a condition called acanthosis nigricans—can be a sign of GI cancers (though it’s a far more common skin symptom of diabetes, see below). Finally, patients who develop a purplish rash around their eyes or purple lesions on their hands, called dermatomytosis, could have an underlying cancer (it’s been linked with cancer of the cervix, lungs, pancreas, bladder, ovaries and stomach).

PRO P.O.V. “Some cancers can first present with skin signs,” says Dr. Robertson. “Each presentation is unique, but what’s common to all is you’re going to ask many more questions and explore what might be the underlying cause.”

With Addison’s, a person’s adrenal glands don’t produce enough steroid hormones. This triggers a range of symptoms that develop over time.

WARNING SIGNS An unexplained tanning or darkening of the skin—for example, it’s winter in Canada but you’re bronzing up nicely—is the telltale skin sign for Addison’s. The darkening can also be seen in the mouth (gums) or inner ear. 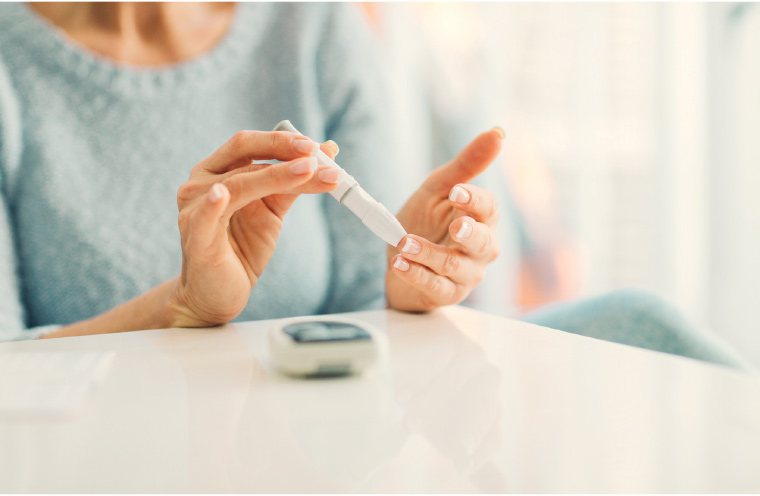 There are 11 million Canadians living with pre-diabetes or diabetes, a condition where the body either cannot produce insulin (the hormone that controls blood sugar), doesn’t produce enough of it, or becomes resistant to it, leading to dramatic swings in blood sugar that can damage blood vessels, nerves and organs.

WARNING SIGNS “There are at least 10 or 15 skin signs or changes that you can see in diabetes,” says Dr. Robertson. The most common include xanthomas, which are yellowish nodules that are fat deposits; acanthosis nigricans, the dark, thick, velvety plaques that appear on the nape of the neck or in the armpits or groin area; and diabetic dermopathy, where the legs develop spots of hyperpigmentation from poor circulation due to high blood sugar.

Additionally, uncontrolled or poorly managed diabetes can lead to a range of serious secondary skin conditions, from infections and ulcerating lesions to neuropathy, which is the loss of feeling in the fingers or toes from poor circulation.

PRO P.O.V. “Many of the skin problems arise from poor circulation due to long periods of high blood sugar,” says Dr. Lau. The good news? If you treat the disease by controlling blood sugar through insulin therapy (Type 1) or weight loss and diet management (Type 2), the skin symptoms should go away over time.

WARNING SIGNS In hyperthyroidism, skin signs include warm, moist skin, increased sweating, redness of the palms or facial flushing, along with thinning hair or hair loss and spooning or concavity of the nails, are outward signs of an overactive thyroid. A person might also develop what’s called a “thyroid stare” because the eyelids pull back and the eyes seem to bulge.

What the expert says: “For women especially, the hair loss can tip them off. They start losing hair from the scalp without understanding what’s going on,” says Dr. Lau.

Someone might also have cold hands and feet and notice a lack of sweating, along withunexplained weight gain.

PRO P.O.V. “A dermatologist might do some screening labs— it’s easy for us to order a thyroid test. Once the internal diagnosis is confirmed I would refer back to the family physician or to an endocrine specialist,” says Dr. Ulmer.

A gastrointestinal disorder, Celiac Disease causes a person’s immune response to attack the small intestine after consuming gluten-based foods. Over time this harms the organ’s ability to absorb nutrients and move food along.

Sometimes celiac disease presents with an itchy rash called dermatitis herpetoformis that shows up as blotchy red spots on the arms and elbows.

PRO P.O.V. “When a patient comes in with a generalized blistering rash we’ll screen them for celiac disease,” says Dr. Robertson. “That may be the way they find out they have it.”

The word hepatitis means “liver inflammation,” and it’s caused by a virus that’s transmitted through the oral-fecal route (Hepatitis A), semen contact during sex or blood contact from a transfusion or sharing needles (Hepatitis B and C). It can also be passed from mother to child during pregnancy. In most cases Hepatitis A clears up on its own, but Hepatitis B and Hepatitis C, which is the most common form of the disease in Canada, can become chronic diseases that eventually cause cirrhosis and liver failure.

WARNING SIGNS Yellowing of the skin and the whites of the eyes, known as jaundice, is the classic skin symptom. Patients may also experience severe itching. Hepatitis C can also cause scaly skin rashes, or even necrotic ulcers caused by a kind of anemia that develops as a reaction to the virus.

PRO P.O.V. “People should ask for screening for Hepatitis B and C and they should have their liver biochemistry checked. The public has to be proactive in what they ask their doctors to do,’” says Dr. Eric Yoshida, a gastroenterologist and Chairman of the Canadian Liver Foundation Medical Advisory Committee. It’s crucial to catch Hepatitis B and C early, as many people won’t have any symptoms until the liver becomes cirrhotic. 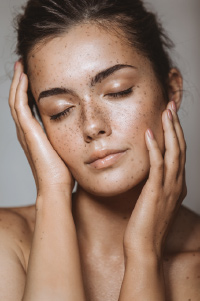 Four common skin signs associated with aging that are harmless and easily removed, if you’re so inclined.